INSIGHTS from the SEDRA

Insights from the Sedra is a project of the Scholar’s Kollel of Great Neck. It aims to provide several questions and answers about the Sedra, culled from various commentaries, including the following: Baal Haturim, Darash Moshe, Vedebarta Bam by Rabbi Moshe Bogomilsky, Torah Treasures by Dov Furer, Wellsprings of Torah by Alexander Friedman, and Kol Dodi by Rabbi Dovid Feinstein, Great Torah Lights by Rabbi Yitzchak Meir Goodman, Something To Say by Dov Wasserman, The Vilna Gaon, and  Growth Through Torah by Zelig Pliskin.

QUESTION: How did their souls become connected?

“And the report was heard in Pharaoh’s house, saying, ‘Yosef’s brothers have come,’ and it was pleasing to Pharaoh and his servants.” (45:19)

By descending into the Egyptian exile, the Jewish people began the process of elevating and transforming the 70 nations of the world. Yocheved’s birth just before Yaakov’s family entered Egypt brought their number to 70, thus enabling Yaakov to begin the mission of refining the 70 nations.

The process of transforming the world is twofold: first, we must cure the world of its opposition to holiness, and then, we must transform it into holiness. The former is the “masculine,” assertive approach, whereas the latter is the “feminine,” nurturing approach.

Rashi quotes a Midrash (Tanchumah 11) which explains that Yaakov sent Yehudah ahead of everyone to establish a yeshivah before their arrival. Why was this necessary? Why couldn’t Yehudah go to Egypt together with everyone and upon arrival found a yeshivah?

The Gemara states that it is prohibited to emigrate from Bavel. The reason for this is Bavel was unique in its abundance of yeshivot and widespread Torah study (Ketubot 111a). This implies that one is prohibited from moving from an area with an existing yeshivah to a place that does not have any yeshivah at all.

“So Yosef imposed it as a statute till this day regarding the land of Egypt…” (47:26)

To fully appreciate Yosef HaTzadik’s greatness, one must be aware of the various trials and tribulations that Yosef endured. At a very young age he was taken from his home and abandoned into a society that was the absolute antithesis of his upbringing. He first served in a home where immorality and idol-worship were rampant. Then, he was sentenced to prison, where he spent the next twelve years in the company of derelicts. Would it have been surprising if Yosef had been influenced and changed by the subculture to which he was exposed? Yet, he not only survived physically and spiritually, he flourished in these surroundings. His trust and faith in Hashem remained firm and unshaken, his conversation replete with a constant awareness of Hashem. His moral character remained unblemished, maintaining an unbelievable sensitivity towards his fellowman.

All of this was the result of the exemplary upbringing and education, which Yosef received in his father’s home. After being saturated with Yaakov’s faith in Hashem, and experiencing firsthand the wonderful moral character which was the hallmark of the Patriarchs, Yosef was able to go into the world and withstand the enormous tests that he faced. Today, in our permissible society, a Jew is constantly being tested. It is necessary for parents to instill in their children faith and trust in Hashem, with an outlook on life that is absolute conformance with the Torah. It is only then, that our children will be properly prepared for the tests of life.                            (Rav Yehudah Zev Segal) 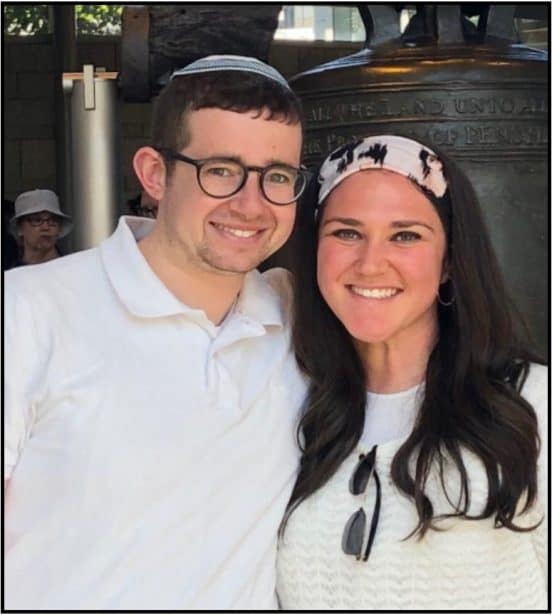 Rabbi White is from London, England. After high school, he attended Yeshivat Hakotel in Jerusalem, and while living there earned a BSc in Politics and International Relations from the University of  London through a distance learning program. He began Yeshiva University Semikha, first in Jerusalem and then in New York, and is now in his final year.

Miriam is from West Hempstead, and is a Judaic studies teacher and Director of Religious Guidance at Yeshiva University High School for Girls (Central). She has a Masters in Education from Azrieli Graduate School at Yeshiva University, and also for many years was a bus director for NCSY GIVE.

Miriam and Aron met in Israel, and got married in April 2019, a few weeks before Pesach.

Mazal Tov to Lauren & Joseph Soleimani on the birth of a daughter. Mazal Tov to grandparents Judith & Abe Soleimani.

Mazal Tov to Sammy & Soraya Cohan on the birth of a grandson born to their children Shiva & Eddie Cohan.