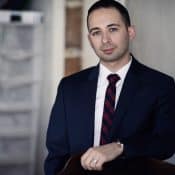 Chazzan Yitzy Spinner started to sing as soon as he could talk. Since then, he hasn’t stopped (singing, that is). His professional singing career began when he became the Miami Boys Choir’s youngest member when he was only 8 years old. He was immediately elevated to the status of soloist and remained there until he left the choir 5 years later. In total, he has appeared and collaborated on over 50 albums in collaborations with other performers. He has performed live in concert with many of today’s most requested artists, and has had the privilege of performing all over the United States, Canada, Israel, Belgium, Holland, Mexico, and England and has appeared on some illustrious stages: Nassau Coliseum, Radio City Music Hall, Avery Fisher Hall at Lincoln Center, Wembley Arena (London), Yad Eliyahu (Tel Aviv).

While adept at playing both piano and guitar as a youngster, it was his vocal abilities that led him to attend Yeshiva University’s Belz School of Jewish Music, and he was immediately asked to join their Board of Directors upon his graduation in 2004.

Most people don’t know about Chazzan Spinner’s deep understanding of music theory. His extensive studies have allowed him to compose hundreds of songs, each with a flavor of its own. He can be routinely found conducting large orchestras, both in studio and on stage, and write music arrangements and orchestrations for some of today’s top music personalities.

Chazzan Spinner served as Chazzan at the Hebrew Institute of White Plains from 2006 – 2018, and joined the Great Neck Synagogue community in October 2018.

The Spinner family – Chazzan Spinner and his wife Rachel, with their children Gavi, Orly, and Sivan – looks forward to many years of friendship in their new community.